As a Rudolph Valentino enthusiast, not surprisingly, my thoughts regularly turn, at this time, to Italy, his country of origin. To see the citizens of that beautiful nation so utterly helpless in the face of COVID-19, aka Coronavirus, is truly upsetting. And having been fortunate, over the years, to have investigated almost every corner of the country, I can’t help but wonder if the many people I met and/or spoke to are alright. The hoteliers. The waiters and barmen and barwomen. The shopkeepers and their staff. The people at the tourist attractions. At the airports. At the bus and train stations. And all of the others. Naturally I think of the people I met while researching. The individuals at the libraries and at the archives. People at the museums. So many of them, I’m sure, if not grieving, suffering daily worry and stress, and wondering when this nightmare will end.

Which is why this post (which wasn’t meant to be posted just yet), is all about one place in Italy that I particularly enjoyed going to; the place where Rudy’s father’s people, the Guglielmi’s resided, a place called: Martina Franca. It was somewhere I just had to try to get to. And I’m pleased I did, as it was, thanks to an Historian I encountered, perhaps one of the most fruitful of all the many fruitful and rewarding trips I’ve made while investigating ‘The Great Lover’.

I found myself at Martina Franca, on the morning of April 30th, 2014, just 24 hours after arriving in Puglia at Bari Karol Wojtyla Airport. Having decided to use a day set aside for checking emails, making phonecalls and generally connecting with all of the places that I expected to be and the persons I’d planned to see, to instead be somewhere. On the train, on the way there, I had time to time to relax and enjoy the view. It was my first proper look at the region that Rodolfo Guglielmi had departed a century previously; and I found it to be wonderful to behold. The terrain, between flatter sections where olives were growing, was gorgeously rugged. (It reminded me a great deal here and there of Greece.) Clusters of the famous stone dwellings called Trulli were visible from time-to-time. Their conical roofs surmounted with varying decorations. Sometimes stone balls. Sometimes crosses. And other times pointed stones.

Several things struck me. I noticed many children with spectacles and wondered if poor eyesight was a Southern issue. The waves of history were clearly visible in the faces. The hair was often curly and the skin dark. At one station that we paused at, I saw a tall and attractive young man on the opposite platform. He had a definite air of Valentino, and stood in a similar manner to Rudy; with one leg slightly bent. Much later, while waiting for food at a Take Out, I saw another youth, with feline grace and intense, brown animal-like eyes. He looked back at me and it was impossible to maintain my gaze.

After alighting the train, I headed on foot, with my travelling companion, to the ancient heart, known as Old Martina; passing through the street market as we wandered. After a walk uphill, past vegetables, fruit, flowers and clothing and household goods, we arrived at the main square – really a long oblong – where we were confronted by the incredible Porta di Santo Stephano (or Gate of Saint Stephen).  This sensational construction is the way into the centre of the original community. So, after a quick photo. op., we passed through it, and enjoyed what was on offer in terms of what there was to see. I couldn’t help but notice that the Ducal Palace in Piazza Roma was a municipal building as well as being a place of note for tourists. And I determined later, after lunch, to go to see what I could find out there. In the meantime I stumbled across a library, full of young people quietly studying, where, with a little difficulty, due to almost no Italian, I was able to secure photocopies of a lengthy chapter in a book, that looked at the Twenties contest in Italy to find Valentino’s replacement. (Something which will one day be another post here on His Fame Still Lives.)

It was in the afternoon after lunch that I returned to the Ducal Palace to see who I could speak to. By a stroke of luck, a woman was returning to her office there, and when I stopped her and explained why I was in Martina Franca, she told us to go with her to see her Superior, who was a Professor of History. It was one of those chance meetings which at the time astound, and, that as the years pass, astound even more. Once with her Boss, and his colleague, also an Historian, and after telling them what I was wanting to find out, they asked me if I might be able to return the next day. As I was unable to we made an arrangement that I would return the day after. If I did so, they said, they would supply me with as much info. as they could, including the Guglielmi family tree. Not surprisingly I was beside myself with excitement!

On the morning of May 1st, after shifting from Bari to Taranto, and then enjoying a day and a night there, before lunch on the 2nd, I met with a local Author, and then headed to Martina Franca once more. The History Professor and his fellow Historian immediately produced for me the Guglielmi lineage, going back to the early 17th Century, with some corrections to past information that has since been proven inaccurate. As I hope you can see (in the image below), it shows all of the male forebears of Rudolph Valentino’s Father, Giovanni Antonio Guglielmi, and their respective wives, all the way back to Rudy’s Great Great Great Great Great Great Great Great Grandfather; a man who was called: Martino Antonio Guglielmi. Gleaned from local church records, the only way to know anything, it revealed much about Valentino’s family on his father’s side. And is, I suspect, the same lineage supplied to Rudolph’s older brother, Alberto, decades ago. And mentioned in his interview, with Kevin Brownlow, for: Hollywood: A Celebration of the American Silent Film (1980).

For an hour I was talked through it and had all of my questions answered. Rudy’s father’s father, his Grandfather, named Pasquale Vito Alfonso, proving more than one Christian Name was already a family tradition, was a Woodcraftsman. A profession that perhaps sounds unimpressive; until we realise he was clearly sufficiently successful to be able to, as he did, send his sixteen-year-old son Giovanni to Rome, to be trained at the prestigious military academy, at what’s now known as Palazzo Salviati. Then, afterwards, to be in a position to cover the cost of his veterinary instruction. (I was also informed Valentino’s Grandfather became a Woodcraftsman accidentally, as he’d inherited the business of his father-in-law.) Interestingly, his own Father, Rudolph’s Great Grandfather, born in 1800, was a Tailor. And his Father, Pasquale Vincenzo Raffaele, was a Retailer — though what he sold isn’t known. All of which suggests a family of some standing in the community at a time when there was no Italy. Further back, the Great Great Great Great Grandfather, Pasquale Martino Guglielmi, was an owner of goats. (Which, I suppose, was either a bad or a good thing, depending on how many you owned.)

Nowhere – nowhere – is there any evidence of that much repeated additional title of di Valentina d’Antonguollo. And Valentino’s brother found no evidence during his lifetime either. As stated, church records are usually the only means of finding your way back into family history in Italy, and there’s no reason at all for it to have been missed out, if, as is claimed, it was once a right. Were it the case it wouldn’t have disappeared by the late 16th C./early 17th C. So, in my opinion, Rudolph Valentino was either told what he wanted to hear, or, investigated himself, and borrowed the lengthy surname from the actual family that did exist with those additional surnames. (A family I’ve located in my own research in recent years.) 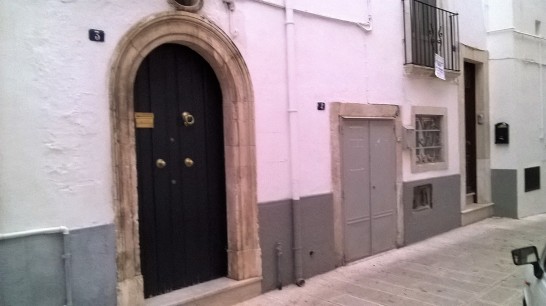 The icing on the cake that afternoon, almost six years ago, was to be taken by the pair of historians to the location of the Guglielmi residence, on Via Pellico. I was told that due to changes of house numbers and alterations in the structure it’s not possible to be certain which exact doorway was theirs. However, we can be sure that it was one one of the two doorways that I photographed and filmed that day, and, that Rudolph Valentino’s family, from his father backwards, was born, lived and died at that spot for generations. It might just be that a young Rudy visited his relations there. Or, at the very least, heard from his Veterinarian Father stories of those who’d occupied the residence.

What more can I say about my two visits to Martina Franca? Not much, I think. Except, that it was clearly a once in a lifetime experience on both occasions. Is there anything more thrilling than making a pilgrimage to the ancestral home of an Idol? No. Not for me. It goes without saying that to know an individual of historical importance, and to understand them, you must connect as much as you’re able. Delve. Dig. Be open to any new information. See old information afresh. Try to view what they viewed. Walk where they walked. And touch what they touched. If you can you’ll be as close as you can be to anyone long gone — and they’ll be closer to you.

I hope that you’ve enjoyed reading this, for me, brief post about Rudolph Valentino. As I said right at the start, this was meant to be a future piece, but seemed timely, considering the current situation in a country that I, and I’m sure many of you, know and love. I pray that everyone I encountered emerges fully from the pandemic. And I wish that both Italy and its citizens can again be what it and they were on those two days in 2014. Thank you for reading. And look out for the next post on His Fame Still Lives, which will be added soon, and is my contribution to The 2020 Classic Literature On Film Blogathon.

I've been interested in Valentino since childhood, when my maternal grandmother, a lifelong fan, told me all about him. To know and appreciate him fully I've travelled to many of the major sites - his birthplace, Taranto, Martina Franca, Perugia, Nervi, Paris, New York, L. A., S. F. and elsewhere - and have documented those trips. The purpose of this modest Blog is to share that knowledge and any new finds I stumble on. Copyright S. T. Constable Some Rights Reserved. View all posts by hisfamestilllives